A painting hanging in the Cancer Centre at Abbotsford Regional Hospital will send a welcoming signal to aboriginal patients – a message they may not have received from health-care facilities before.

The painting – depicting two Metis youth holding hands and facing a full moon over a rocky landscape – was unveiled last week as part of a province-wide program to introduce aboriginal art into BC Cancer Agency locations. The program is a partnership between the First Nations Health Authority, the Metis Nation of B.C. and the BC Association of Friendship Centres and the BC Cancer Agency.

A unique art project in Thunder Bay, Ont., is bringing together police officers and female survivors of sexual assault, and helping them express how violence has affected their lives.

Honouring our Stories uses everything from beading to weaving to digital storytelling to illustrate how sexual violence impacts the victims and investigators.

"Art is a great leveler. It's something that brings people to their own deepest place where they can tell their own personal stories and it's also a great way to share your story with someone else, " said Gwen O'Reilly, the director of the Northwestern Ontario Women's Centre in Thunder Bay. 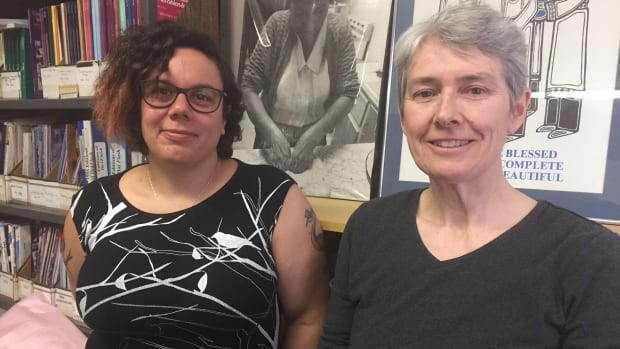 Clients of the ArtWorks Studio at the Canadian Mental Health Association, led by local artist Tina Siddiqui, joined members of Interior Health’s Mental Health and Substance Use team and art committee to unveil their beautiful four-paneled art piece this past week.

“I’d like to thank the Canadian Mental Health Association’s ArtWorks Studio for creating and donating such a beautiful painting,” said MHSU executive director David Harrhy. “Our goal is to create a welcoming environment to all who visit the Community Health and Services Centre and this vibrant piece helps us achieve that.”

Twelve individuals worked together to design and create the painting as a representation of health and well-being in the beautiful surrounding areas. The artists hope to express their wish for health and happiness for all people and communities across IH.

For hundreds of adults living with mental health issues, Artbeat Studio has provided an outlet to socialize and heal for the past 12 years.

"As we grow and with less funding, it got us into a tight spot right now," she said.

Artbeat launched an emergency crowd-funding campaign to raise $150,000 — money the organization lost after previous federal grants fell through and the Downtown Winnipeg BIZ postponed its 2016 CEO Sleepout, which normally gave them funds.

The $150,000 would sustain their programming until the end of the year while they look for more grants and donors, Bart said.

Over at Artbeat’s Studio Central location on Kennedy Street, it was business as usual among dozens of drop-in clients Thursday.

Art often provokes uncomfortable conversations, so it’s no surprise there were some heavy moments in preparation for an upcoming exhibition in Calgary that explores themes of recovery and healing.

The three month, bi-annual Hear/d Residency program at the Alberta College of Art and Design (ACAD) aims to create meaningful discussion about mental health and student well-being on post-secondary campuses.

The program wraps up with a three week exhibition curated by two student mentors, who also facilitate the residency.

“This year has been kind of intense, it’s probably been some of the heaviest conversations I’ve had in my post-secondary experience,” said Ryan Danny Owen, a fourth-year drawing major at ACAD and one of this year’s mentors.